There are multiple ways to implement and enjoy your Sony RSX-GS9 ("GS9").

When the GS9 is installed, one must choose between analog outputs (RCAs) or an optical output (TOSLINK). Many mistakenly believe TOSLINK implementation is superior because it avoids digital-to-analog ("D/A") conversion within the GS9 and allows one to connected directly to the digital input of a downstream digital signal processor ("DSP"). Additionally, optical cables are not susceptible to electromagnetic interference ("EMI"), nor do they introduce ground loops. This seems like a wise strategy until one realizes the following shortcomings:

In spite of the aforementioned shortcomings, many will cling to the theoretical argument that using the analog outputs introduces unnecessary D/A and analog-to-digital ("A/D") conversions. Adherents to this theory believe that eliminating such "unnecessary" conversions by using the optical output must simply be "better". Of course this is true, theoretically.

In practice, however, the D/A converter (ES9018S) in the GS9 is state of the art with  32-bit/384kHz or 11.2MHz DSD resolutions, rendering 127dB DNR, and –120dB THD+N. Likewise, downstream A/D converters can be equally impressive. The AKM A/D converter in the Helix DSP Pro is capable of 32-bit/768kHz resolution. Combined with superior electrical components functioning with the D/A and A/D converters, it is possible to realize no perceptible loss in sound quality with additional D/A and A/D conversions.

​For these reasons, three analog outputs, right, left, and subwoofer, were implemented  in the Magic Bus. In an effort to preserve the incredible performance of the GS9, Jon Whitledge made three custom RCA cables using products from Kimber Kable and WBT. Specifically, Kimber's KCAG triple-braided Silver wire was used to create interconnects approximately 13 feet (4.0 meters) long. Each cable was shielded with a Beryllium-Copper braided sleeve, grounded at the source end. Each cable was further protected and shielded by a carbon-infused nylon braided sleeve. Silver RCA connectors from WBT (part number WBT 0102 AG) were soldered to the interconnects using WBT's lead-based solder containing 4% Silver, part number WBT-0820.

The GS9 is equipped with three digital inputs, USB1, USB2, and USB-DAC. USB1 and USB-DAC are located on the front panel of the GS9. USB2 emerges from the rear of the GS9 by way of a short pigtail containing a USB-Type A female receptacle.

The Magic Bus features a Neutrik USB type A receptacle (part number NAUSB-W-B) located in the glovebox to serve the GS9's USB2 input. A one meter long USB cable from Kimber (Kimber Select KS 2426) was used between the Neutrik receptacle and the USB2 receptacle.

Many mistakenly believe USB cables simply transmit "ones" and "zeroes" and could not possibly influence the sound. Not true! Jon Whitledge has proven this with numerous customers and show attendees by performing A-B comparisons. To add validity to the test, generally the test subject's digital source is used. The test starts with a commodity-grade USB cable (Belkin, for instance) for the control, test article A. Next, Jon discusses digital transmission theory from an electrical engineering standpoint and introduces a bias AGAINST test article B (usually the Kimber Select KS 2426). The test subject first listens to test article A for as long as desired. Then, within 30 seconds, or less, the cables are swapped and test article B is experienced. Within 30 seconds of playback, the test subject adopts the the look of surprise and a state of stupor, and states, "How can this be? I easily heard a difference that should not exist."

Jon has also conducted A-B-C comparisons for a group of folks (generally four or five) inside the Magic Bus. In a likewise manner, A is the control, B is the test subject's USB cable, and C is the "reference" (Kimber KS 2426). So far, the Kimber Select KS 2426 has unanimously defeated every competitive cable, except one - Kubala-Sosna's Realization USB cable (retail price = $3500 for one meter). All test subjects agreed that both the Kimber and the Realization are exceptional cables, but if price were a consideration, they'd choose the Kimber (retail price = $795 for one meter). Another cable has emerged as a value leader: StraightWire's USBF-Link (retail price = $180 for one meter). Jon Whitledge's personal testing has confirmed this cable is a close competitor to the KS 2426. Jon Whitledge will continue to experiment with USB cables, and may one day introduce a GS9-specific cable (USB type A to USB micro type-B) using Kimber products.

Users of the GS9 must understand that native DSD playback can only be done by using the USB-DAC port. USB1 and USB2 will play DSD files, but necessarily converts them to PCM in the process (DSD over PCM, or ("DoP").

There are many ways to enjoy the GS9. Each of the many ways has certain advantages and disadvantages. Only the user can decide what works best for him or her.

When demonstrating the Magic Bus, a few ways emerge as favorites:

The Magic Bus was the first automobile in North America to play 11.2 MHz DSD natively.

For USB2 playback, the Magic Bus uses a PNY 512GB memory stick. An iPhone 6 Plus running Music Center is used as the Bluetooth remote controller. No cables are required, however, the use of certain USB filters is beneficial. A favorite is iFi's iSilencer3.0 USB Audio Noise Eliminator. This goes between the memory stick and the USB receptacle. What's nice about this usage is the tidiness - no visible cables or memory sticks protruding out of the GS9. It's perfect for both casual listening and demonstration.

USB-DAC playback is for ultimate playback performance, especially when enjoyed with the Sony Premium Walkman ("Walkman") as the source. The Walkman is fitted with a 256 GB microSD card to store music files. The quality and usability of the Walkman is second to none.

Given that the USB-DAC port is a microUSB, its ability to support heavier audiophile-grade cables is questionable. When using audiophile-grade cables, often times an adapter is required. Certain adapters don't work well with the GS9 - they include StarTech and L-com - avoid them because they introduce intermittent cutouts or they bend. 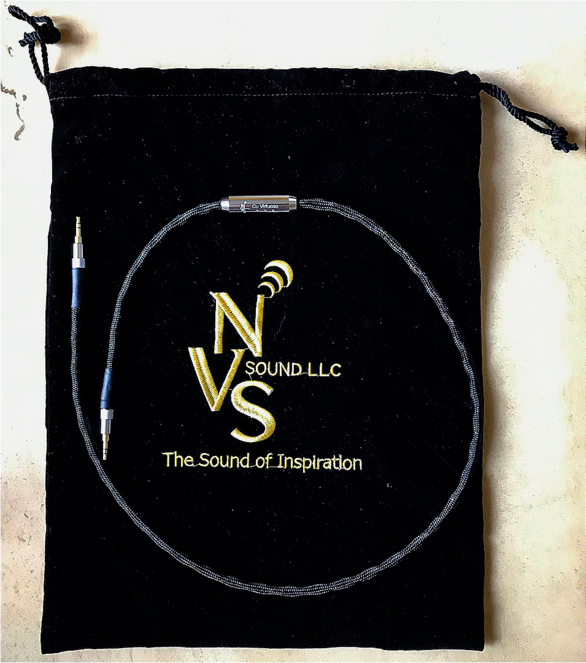 One may question the efficacy of going from digital to analog (at the phone), then re-converting the analog back to digital (at the processor). It seems logical, from a theoretical point of view that these seemingly unnecessary A/D and D/A conversions would degrade the sound. The sonic result, however, is extraordinary. If sonic degradation is occurring, the benefits of MQA certainly outweigh the degradation, if any. MQA is audibly superior in many ways - bass is more incisive, articulate, and punchy, imaging is better, and the smoothness in the treble is beautiful. Jon Whitledge has done many MQA and non-MQA comparisons and demonstrations, and every time, MQA sounds better. Recently, Jon Whitledge gained access to 96 kHz / 32-bit PCM master files which were then converted to MQA. The musician who made the recording readily recognized the improvements rendered by the MQA decoding.

​The Walkman implementation requires the use of a special adapter cable made by Sony, part number WMC-NWH10. In the photo above, a JitterBug was inserted between the Sony adapter cable and the Kimber USB cable. This seems to improve sound quality. DO NOT insert an iSilencer3.0 in place of the JitterBug - it interrupts the connection.

​For those with iPhones, Qobuz can be streamed using the products shown below:

The Walkman implementation is shown below: 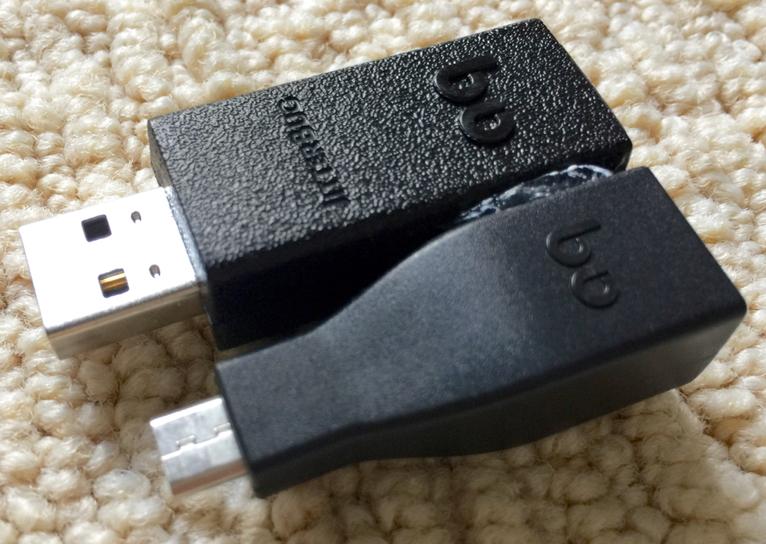 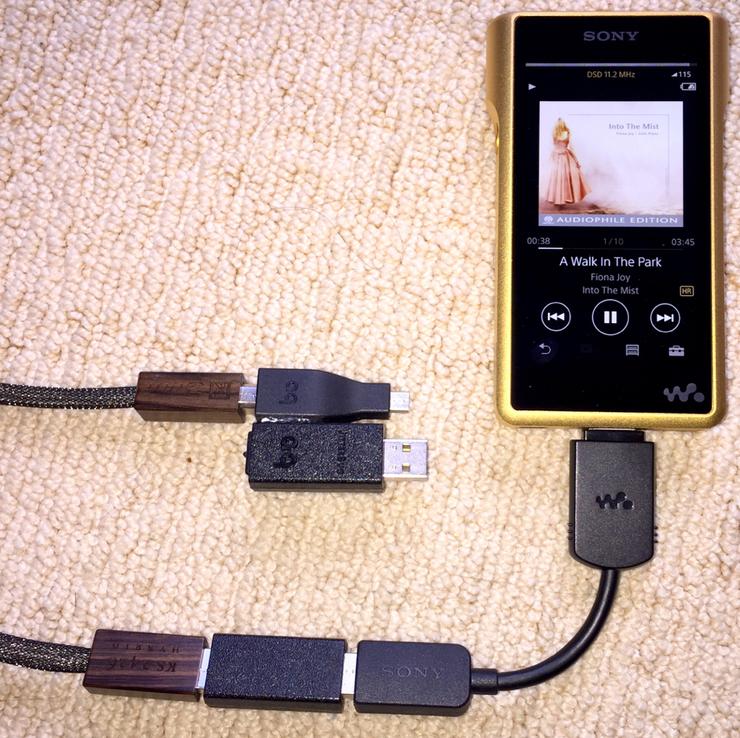 In this case, a special Apple cable adapter is required, part number MK0W2AM/A.

MQA audio can be streaming using Tidal. Tidal labels the albums and songs as "Master". For more information about MQA, visit https://www.mqa.co.uk, and http://bobtalks.co.uk/#. MQA offers significant sonic benefits over conventional PCM files, which include "sonic de-blurring" and "audio origami". One way to enjoy these benefits is to use an LG V30, or other comparable mobile phones designed specifically to "unfold", or fully decode MQA files. In this case, one uses the 3.5 mm audio out jack on the phone because its the only output that fully renders and decodes MQA. The full benefits of MQA cannot be realized any other way with this phone, and others like it.

The fully unfolded and de-blurred analog audio signal must be routed into the AUX IN Sony RSX-GS9 input. A standard 3.5 mm to 3.5 mm audio cable can be used, but there is considerable sonic benefits to using state-of-the-art cables. Foremost among these types of cables is manufactured by NVS Sound (https://nvssound.com/about-us/). The company's founder, Nathan Vander Stoep, made a custom cable exclusively for the Magic Bus. Its quality of construction and sonic performance is exceptional, among the very best available. ​