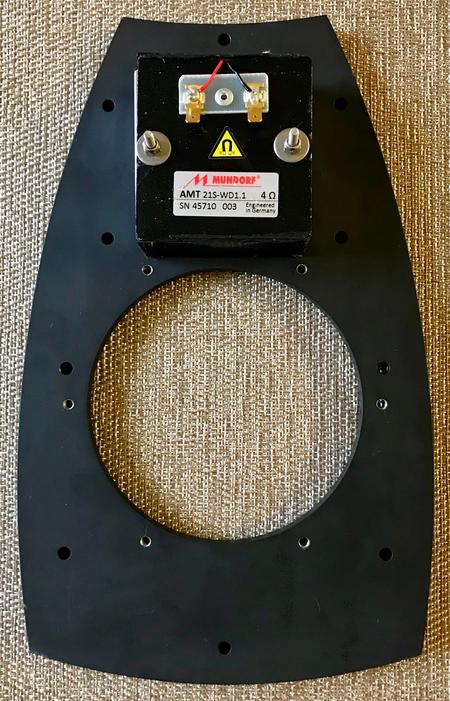 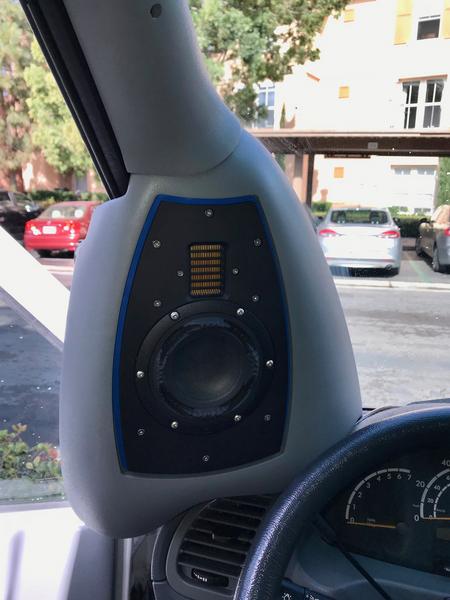 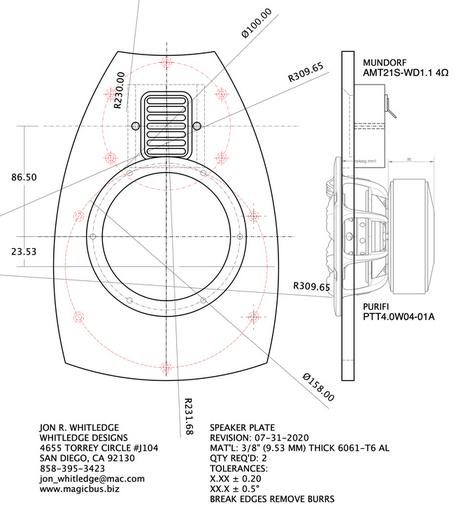 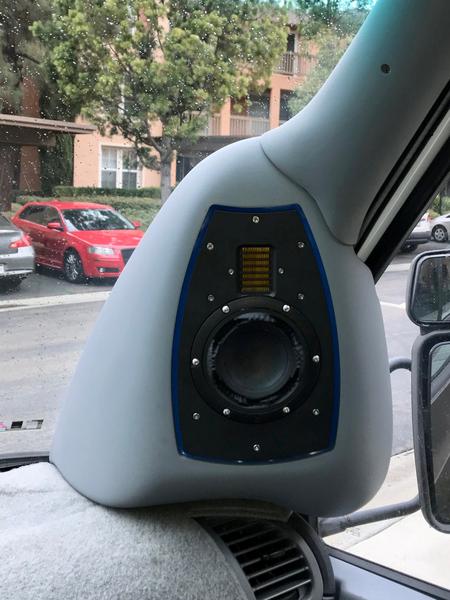 Back side of plate with tweeter mounted.

Thanks to major breakthroughs in loudspeaker technology, the tweeters and midranges in the Magic Bus have been upgraded.

The legendary Esotar² 110 tweeters and the MW150 Neo midranges have been used in the 'Bus since April 2011. It was not thought possible to substantially improve upon their extraordinary engineering, durability, and reliability - until now.

A new company, founded by audio industry legends, named Purifi Audio (https://purifi-audio.com), has emerged as a loudspeaker transducer leader. When they introduced their first product, a 6-1/2-inch woofer, it received universal acclaim as the very best woofer ever made. Purifi published a comprehensive set of objective measurements that no other woofer could match, based on innovations never before seen in woofer design. These were considered for use in the Magic Bus' dash monitor but they were a bit too big for the enclosure.

When Purifi announced the pre-release of a 4-inch mid-woofer, I contacted them and asked for comprehensive measurements to determine if they would work in the  existing dash pods. Unfortunately, they were in the early prototyping stage and the measurements were not yet finalized. Months went by, and I followed their work closely. When the state-of-the-art measurements were published, I quickly modeled them for my dash enclosures and determined they were perfect. Literally, the mid-woofer I'd dreamed of owning !!!

I requested from the brilliant folks at Purifi to own the first pair ever used in a mobile audio application. But something even better happened - I received serial numbers 2 and 3, the first pair in the world to be sold !!!

​When I received the 4-inch mid-woofers, I measured them with Woofer Tester WT3, and sure enough, my measurements closely matched their publish values. These mid-woofers exhibited unbelievably long excursion, never before achieved low distortion, and essentially non-existent cone breakup. I was blown away and excited.

After I received my mid-woofers, this review came out: (https://hificompass.com/en/reviews/purifi-audio-ptt40w04-01a-midwoofer). Yevgeniy Kozhushko wrote:

The measured characteristics let to classify the PTT4.0W04-01A as a 4" midwoofer of the highest class. In fact, today it is the world's best midwoofer in its class. If the concept of  "Big sound out a small box" is close for you, then there is simply no better option to find. Bravo, PURIFI!

The next step was to pick tweeters whose performance was commensurate and complimentary to those of the mid-woofers. Since cost was no object, I evaluated leading diamond tweeters and concluded that Mundorf AMT tweeters were among the very best, if no the best in terms of impulse response, frequency response, and distortion. A review with comprehensive measurements can be found at https://hificompass.com/en/speakers/measurements/mundorf/mundorf-amt21cm21-c . I reached out to Mundorf and asked them if they would like to sponsor the Magic Bus - they said YES!

The Mundorf tweeter is clearly a radical departure from a silk dome tweeter I was using. For example instead of acting like a pistonic device the AMT is a lightweight folded membrane, whose mass is barely larger than the air it moves. The radiating area of the AMT is about 5 time greater than a 1-inch dome tweeter. Additionally, the AMT presents a mostly resistive load to the amplifier, which is the ideal. In contrast, dome tweeters are subject to the sonic limitations of voice coils and have a higher moving mass. Interestingly, several skilled loudspeaker designers were pairing the Purifi drivers with Mundorf tweeters. Given the susceptibility of diamond tweeters to dome fractures when subjected to accidental stimuli, I decide to go with the Mundorf tweeter.

I requested my Mundorf tweeters with no faceplate so I could design my own. I spent weeks designing the ultimate speaker plates to be machined from 6061-T6 Aluminum.  Ultimately, I was able to mount the tweeter behind the speaker plate and the Purifi mid-woofer on the front of the plate. Formerly I used 1/4-inch steel for the plate but this time I decided to go with 3/8-inch Aluminum. Because the stiffness of a plate goes up by the cube of the thickness, the new Aluminum plates were much stiffer than the previous steel plates. 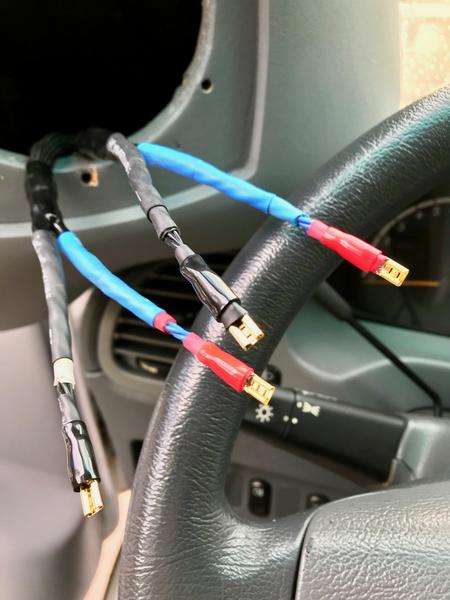 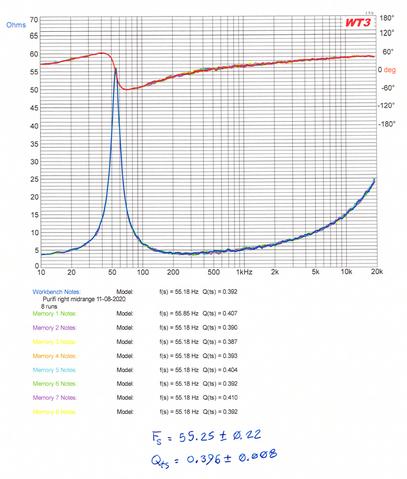 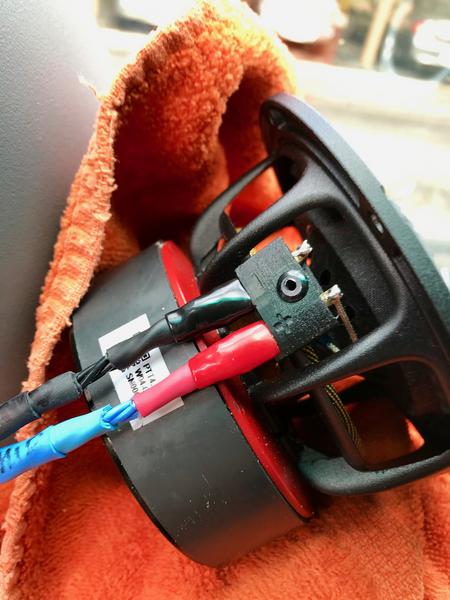 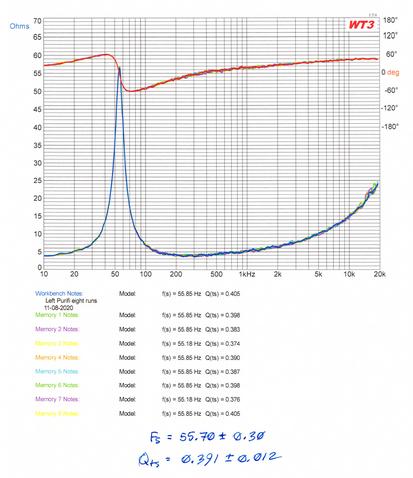 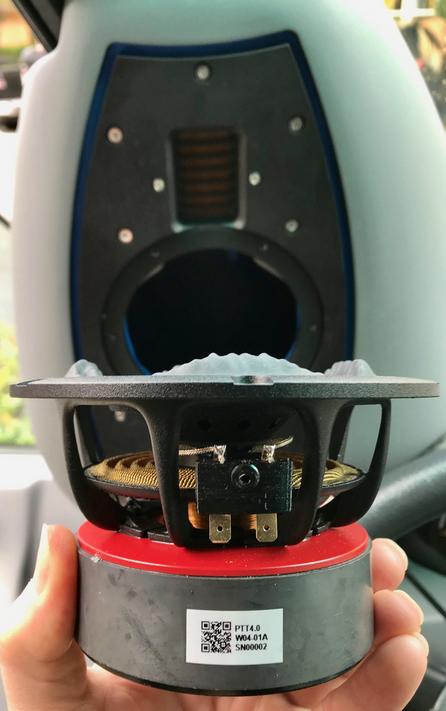